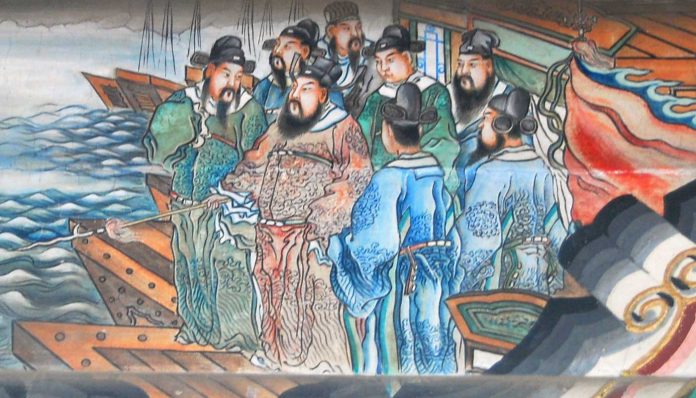 Cao Cao rose to power in the final years of the Eastern Han Dynasty in the early 3rd century. He played a central role in the establishment of the state of Cao Wei in the Three Kingdoms period, which earned him the title “Emperor Wu de Wei.” But, Cao Cao’s ancestry has been in question for more than 1800 years, because his father was adopted. DNA studies now confirm that Cao Cao belongs to the same paternal lineage as his granduncle Cao Ding, putting to rest the rumors that his father was adopted from beggardom.

Cao Cao was the son of Lady Ding and Cao Song, the adopted son of powerful and influential eunuch at the Han court Cao Teng. His involvement in government began at the age of 20, when he was appointed district captain of Luoyang.

Cao took his position very seriously, going as far as having an uncle of Jian Shuo (another powerful and influential eunuchs at court) flogged for walking in the city after curfew. Interestingly, this impressed Jian Shuo and higher authorities and Cao was promoted to the post of governor, before being moved into the imperial capital.

Cao Cao’s military career began when he was appointed Commandant and police chief at Luoyang. He had a reputation for being strict with the law and for being unafraid to challenge the rich and the powerful.

He became even more prominent during the Yellow Turban Rebellion, which took place in the 2ndhalf of the century, when the peasants revolted against Emperor Ling of the Eastern Han Dynasty. The rebellion is named such, because the peasants wore yellow turbans that represented the color of the earth. They hoped it would defeat the element of fire selected by the Han.

As Captain of the Cavalry, Cao was extremely successful in suppressing the rebels. He was also responsible for the final thwarting of the Yellow Turban movement in 215 CE.

Rise of the warlords

During the rebellion several warlords gathered armies to defend their area.  But, once the rebels were no longer a threat these armies started clashing with each other, putting the country into a state of civil war.

Cao Cao’s rise to power began after the death of Emperor Ling, when he began building his own army. Through short-term and regional-scale wars, Cao Cao continued to expand his power. His arm had over 30, 000 troops by the end of 192 and had established himself as the powerful governor of Yan province by 196 CE.

When Cao Song was killed by troops of the governor of Xu Province, an enraged Cao Cao massacred thousands of civilians in the Xu province to avenge his father.

He eventually went on to gain complete control of the Xu, the Bing Province, the province of Ji, the Qing Province and Bing, becoming the effective ruler over all of northern China and the most powerful of Chinese warlord. His objective was unifying China to recapture the lost glory of the Han Empire.

With his territory established Cao went on to hold powerful titles at court. By 205 CE he had control of the government leaving the emperor in place as a token gesture to traditions in the past. He took many of the emperor’s privileges to himself going on to becoming Imperial Chancellor in 208 CE, and taking the tile of “Duke of Wei” in 213 CE.

In 216 CE he declared himself the “King of Wei,” as he controlled nine bestowments and the fief of ten cities under his domain of Wei. He also made one of his daughters’ empress, to keep his stronghold on power.

Over the next years, Cao Cao and the southern warlords Liu Bei and Sun Quan continued to consolidate their powers in their regions. During the many wars fought, China became divided into three powers – Wei, Shu and Wu.

When he died in 220, Cao Cao had failed to unify China under his rule. But, he had set the foundation for what was to become the State of Cao Wei in the Three Kingdoms.

It was common knowledge that Cao Cao’s father, Cao Song, was adopted. But, there have always been rumors that Cao Song was adopted from beggardom, rather than from within Cao’s grandfathers own clan. So, for more than 1800 years Cao Cao’s ancestry has been in question.

Even though there was no way to prove the lineage of Cao Song in ancient times, with advances made in DNA sequencing technologies today we can address questions of heritage and ancestry quite easily with genetic analyses. This is what a group of scientists set out to do in 2012.

They collected DNA samples from 280 people who belonged to 79 different Cao clans or other clan clusters from multiple locations throughout China. Those who claimed to be descendants of Cao Cao had to prove their ancestry with official records for at least 70-100 generations.

STRs are short sequences of DNA (2-13 base pairs) that are repeated over and over again. The number of repeats for each STR marker varies between people. And, this variation can be used to determine a person’s Y-DNA profile or Y-DNA haplotype.

Researchers found six different haplotypes within their 280 samples. One haplotype was more common in people who belonged to Cao clans and was rare in those who were not clan members. This meant that Cao Cao and his descendants likely belonged to the Y-DNA haplogroup O2*.

A match to his paternal granduncle

With Cao Cao’s haplotype mapped out, it was now possible to tackle an 1800-year-old debate about Cao Song’s (Cao’s father) ancestry. If Cao Song was indeed adopted from within his own clan, Cao Cao should share the same Y-DNA profile as his paternal granduncle, Cao Ding.

The emperor and his granduncle are not directly related, since his grandfather Cao Teng was a eunuch. But, Cao Teng and Cao Ding were brothers, so they share the same Y-DNA profile. A match between the Y-DNA profile of Cao Cao and Cao Ding would mean that Cao Song was the son of a paternal relative (e.g. a brother of Cao Teng).

Researchers tested this hypothesis using a tooth that came from the tomb attributed to Cao Ding. They generated a partial Y-DNA STR profile for Cao Ding, which matched closely to the Y-DNA haplogroup O2* – the same haplogroup as Cao Cao’s descendants.

Emperor Cao is one of the most famous figures in Eastern Asia. He owes much of his popularity of the historical novel The Romance of the There Kingdoms, a novel based on historical events in the late Han dynasty and the Three Kingdoms period.

However, many say that its portrayal of Cao as a cruel and suspicious villain somewhat mars the image of this brilliant ruler. He may not have realized his dream of unifying China, but Cao Cao left behind a genetic legacy, particularly through his son Cao Pei, who went on to become even more powerful than his father.

These studies have defined the presumed Y-DNA STR profile of Emperor Cao from modern clans that proclaim to be his descendants. If you have taken the DNA Paternal Ancestry Test, you can compare your DNA to see if you have descended from the same Cao clan.

Moving, grooving, exercising and genes: The secret behind your love of exercise
Read more
Skin Health

Blueberries for your skin: Antioxidants and the genes that protect your skin from getting old too fast
Read more
Fitness

The disconnect between diet and evolution, and how it predisposes us to type 2 diabetes
Read more
- Advertisement -