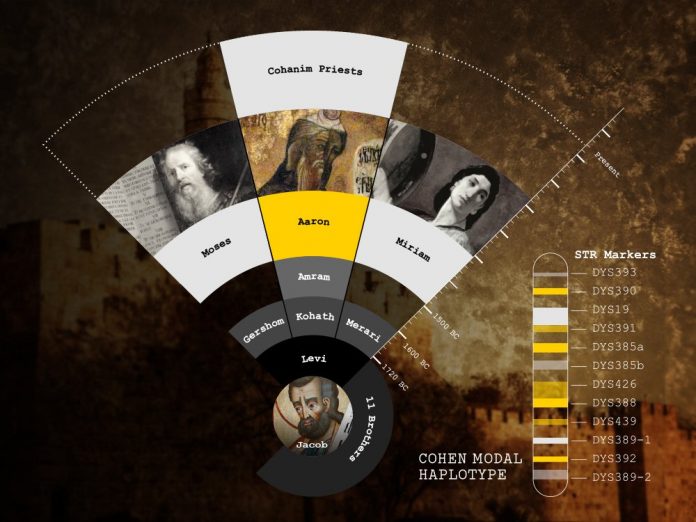 There are some among the Jews who holds special status. These Jewish ‘aristocrats’ are known as the Cohanim. They belong to the Jewish priestly cast that originated with Aaron, the brother of Moses. Aaron was the first Cohen, and the first High Priest. The titles, privileges and duties that were bestowed upon him, has been passed down from father to son, for over a hundred generations. Did you know that all Jewish Cohen men share a set of DNA markers that sets them apart from the non-Cohen?

Who are the Cohanim?

After Moses led the Israelites out of Egypt, he went up to Mount Sinai to receive the Ten Commandments. When he didn’t return for so long (40 days and nights), the Israelites worried that he would never return. So, they made the Golden Calf. They built an altar for it, burnt offerings, and worshipped it. Except for the tribe of Levites. They refused to worship the calf.

Upon Moses’s return God assigned the Levites special religious duties, for their faithfulness. Aaron, the brother of Moses was anointed the High Priest. His descendants recieved a monopoly over priesthood, and they became the Cohanim (aka Kohanim).

Aaron was the first Cohen. His family was solely responsible for making offerings on the altar, leading temple service, blessing people, and teaching the Torah to the Israelites. The remaining Levites recieved other religious duties inside the sanctuary.

For more than 3,300 years, this Aaronic priesthood has been passed on from father to son. Even after hundreds of generations, those who belong to this Jewish priestly family still identify themselves as Levites or the Cohanim.

But, are the modern day Cohanim really direct descendants of Aaron? We can test this claim with DNA analyses.

Dr Karl Skorecki, a Jewish Canadian physician originated the  ‘Cohanim Hypothesis.’ He argued that if all Cohanim share a single ancestor, they should share the same set of DNA markers. Hence it should be possible to the roots of Cohanim to a common ancestor using DNA.

He chose Y-DNA for his genetic analyses. The Y chromosome is also passed down the paternal line from father to son, making it useful for tracing paternal lines. This would be ideal for studying the father-to-son (patrilineal) inheritance pattern of the Cohanim priesthood.

SNPs (single nucleotide polymorphisms) are slow mutating markers. They happen at a rate of approximately one mutation every few thousand years, and are useful for tracing ancient ancestry from tens of thousands of years ago.

STRs (short tandem repeats), on the other hand, are more useful for tracing recent ancestry. They are fast mutating markers that happen at a rate of approximately one mutation in every 20 generations, and are useful for paternity, forensics and genealogical DNA testing.

Y-STRs are short segments of DNA (2-13 bases) that repeat many times. The number of these repeats varies between people. This variation determines a person’s Y-DNA haplotype. A haplotype is a set of distinguishing genetic markers that can be used to trace specific populations.

All men who descend from the same paternal lineage have the same or very similar Y-STR marker profiles. So, all Cohanim men (if they indeed originate from a common ancestor) should share a Y-STR marker pattern or will belong to the same Y-DNA haplotype. This ‘aristocratic’ haplotype should be different from the rest of the Jewish population.

The first DNA study led by Dr. Skorecki looked at two STR markers on Y-DNA: YAP and DS19. They found that a specific STR marker signature (YAP–, DS19B) was more common in Jewish priests. The YAP–marker in particular was found in 98.5% the Cohanim.

Their next study extended the marker size to look at 6 Y-STRs. They looked at 306 Jewish males from Israel, Canada and the UK and, found a Y-DNA haplotype that was more common in Cohanim men. This unique Y-STR profile was designated the ‘Cohen Modal Haplotype’ or CMH.

Both Ashkenazi (95%) and Sephardic (87%) Cohenmen shared this haplotype. Given that these two populations have been isolated for more than 1000 years, this mean the Cohanim line originated before the Jewish dispersal.

However, only 48% Askanazi Cohanim, and 58% Sephardic Cohanim fall into this 6 marker Cohen Modal Haplotype. Also, people who belong to several non-Jewish communities (eg. Yemen, Oman, Iraq) carried Y-DNA STR profiles that matched 5 out of the 6 markers at a high frequency.

So, scientist went on to define a more specific Y-STR profile that can identify those of Cohanim descent. The extended CMH looks at 12 Y-STR markers. This STR profile is found at a higher frequency in the Cohanim and only at low frequency (1.5%) in non-Cohen Israelites.

Are you a Cohen?

Being Cohanim comes with the privilege of saying the blessing over the Torah during religious services and of giving the priestly blessing. Jewish Cohanim have passed down these traditions and honor for thousands of years. Common last names associated with Cohanim ancestry include Cohen, Ben-Cohen, Cowen, Cohn, Kagan, and Kohanim.

Some Cohanim men have even made their mark on mainstream media. The musician Leonard Cohen once blessed his audience with a Cohanim prayer in Tele Aviv. Leonard Nemoy based Spock’s Vulcan salute on the Cohanim priestly blessing known as Kohanim hands.

Genetic studies have determined a unique Y-STR profile that can distinguish men who belong to the Cohanim aristocracy. Whether you have an oral tradition of being a Jewish Cohen or not, you can now find out if you belong to this Jewish priestly family with the DNA Paternal Ancestry Test.

From Friend to Foe: Why our evolutionary need to store fat is now an obstacle in the fight against diabetes
Read more
Metabolic Health

Have trouble staying awake? It might be narcolepsy!
Read more
Ancestry