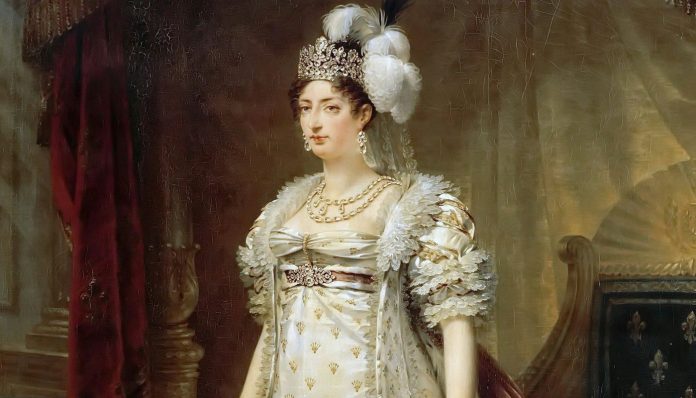 If a mysterious couple moved into the best house in your neighbourhood, and lived in seclusion for the rest of their lives, would you suspect they had something to hide? This is the story of the Dark Countess, aka Sophia Botta, a woman whose true identity is still unknown. Genetic analyses confirm that she was not Princess Marie Thérèse, the daughter of King Louis XVI and Marie Antoinette, as many have suspected.

As the story goes, a wealthy couple showed up in the village of Thuringia in 1807. Three years later in 1810 they moved to the Eishaunsen castle of the Duke of Saxon-Hildburghausn, living the rest of their lives in self-imposed isolation. The villagers nicknamed them the “Dunkelgrafen” or the Dark Counts.

The count called himself Vavel de Versay. He made it clear that the lady was neither his wife nor his lover, but her true identity was never revealed. The Dark Countess rarely left the castle, and when she did it was either in a closed carriage or with a veil over her face. Such mysterious behaviour of course set the rumour mill on fire.

It was widely speculated (without much evidence) that the Dark Countess was Princess Marie Thérèse Charlotte of France, daughter of King Louis XVI and Marie Antoinette.

Marie Thérèse was the only child of Louis XVI and Marie Antoinette to reach adulthood. When Louis the XVI was overthrown after the French revolution, his entire family was imprisoned in the Temple Tower of Paris.

In the year that followed, both of Marie Thérèse’s parents were executed. Her brother Louis-Charles was taken away and entrusted to a cobbler, before falling ill and passing away. When her aunt Madame Élisabeth was executed in 1974, Marie Thérèse became the only one to survive the Reign of Terror.

Upon her release in 1795, she was said to have been banished to Vienna, where she married her first cousin, Duke of Angoulême. However, many question this version of events. The most common theory is that Marie Thérèse would have been so emotionally unstable after her imprisonment that she was instead substituted with her paternal half-sister, Enerstine Lambriquet, which meant that the true whereabouts of Princess Marie Thérèse Charlotte of France were unknown.

The Dark Countess was buried in haste in a strange tomb called the ‘Stadtberg’ outside of the town of Hildburghausen. The tomb remained unmarked, so the occupant couldn’t be identified.

At her death, the Count gave the Dark Countess the name Sophia Botta. She was supposedly an unmarried woman from Westphalia. However, a search of civil registries never turned out a woman by that name.

The Dark Count died in 1845, and years later he was identified as Leonardus Cornelius van der Valck, the secretary of the Dutch embassy in Paris. So the mystery of the Dark Countess deepened even more, and many continued to believe she was Marie Thérèse.

Genetic analyses of the Dark Countess

In 2013, the remains of the Dark Countess were exhumed and two small sections from her femur were sent to two forensics labs (Innsbruck, Austria and Freiburg, Germany) to be analyzed using mitochondrial DNA (mtDNA).

Mitochondrial DNA (mtDNA) is strictly maternally inherited (passed on from mother to child). There are hundreds of copies of the mtDNA genome in each of our cells. It makes this DNA type very useful for the analysis of ancient samples.

Forensic analysis can look at three regions of the mitochondria genome: the coding region (which contain the instructions for genes) and two non-coding regions called HVR1 and HVR2.

The mitochondrial genome remains unchanged from generation to generation, which means two maternally-related individuals will have matching mtDNA.

So, if the Dark Countess was indeed Princess Marie Thérèse (the presumed identity), her mtDNA profile should match that of HRH Alexander, Prince of Saxe-Gessaphe. Marie Thérèse and HRH Alexander are both maternal descendants of Maria Theresia of Austria (see pedigree below).

It turns out that the Dark Countess was not Princess Marie Thérèse. Her mtDNA profile was significantly different from the profile of HRH Alexander.

Not only that, it also didn’t match the mtDNA of Marie Thérèse’s brother (Louis-Charles). His profile was available from a previous study and matched with the profile of HRH Alexander as expected.

Who really was the Dark Countess?

We still don’t have the answer because her mtDNA profile does not match any other profile in current databases.

Either way, if you have taken the DNA Maternal Ancestry Test, you can find out if you may have descended from the same maternal lineage as this affluent and secretive woman.

When the Russian imperial family vanished one night, imposters embraced the opportunity to pretend to be royalty. This is the story of the DNA...
Read more
Weight Loss

Starch digestion and genetics: what does eating pasta have to do with you genes?
Read more
Skin Health