Did you know the skull of the famous Italian poet Francesco Petrarca is missing? 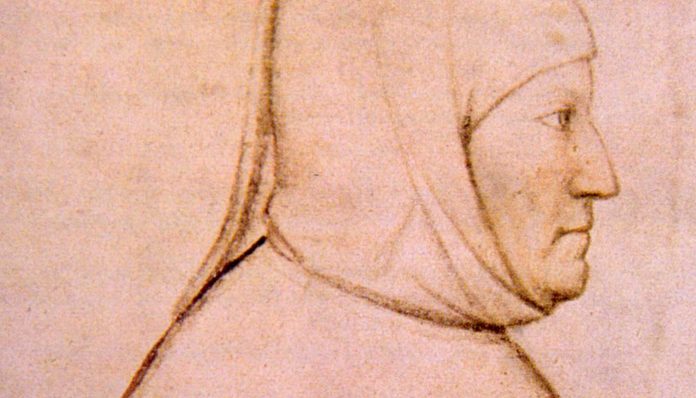 Francesco Patrarca was a Renaissance scholar whose influence reached far beyond his time. In 2003, his tomb was opened so the cranium could be used to generate a computerized model of Patrarca’s face to commemorate his 700th birthday. Unfortunately these plans never came to fruition. The skull was in fragments, and according to DNA analyses it actually belonged to someone else.

Who was Francesco Petrarca?

Francesco Petrarca was a famous Italian poet and scholar from the Renaissance Period. He’s often known as the “Father of Humanism,” who despite having a career in the church believed that worldly achievements should not interfere with having an authentic relationship with God.

His most famous works are Italian poetry, including the Canzoniere (“Songbook”) and the Trionfi (“Triumphs”).

The “Songbook” is a collection of poems inspired by his forbidden (and unreciprocated) love for a married woman, Laura, and intense grief upon her early death during the plague. It’s said that Petrarca left priesthood at the sight of Laura.

Petrarca loved to travel and was known as “the first tourist,” because he often traveled just for pleasure. During his travels he collected crumbling Latin manuscripts, becoming one of the main recoverers of knowledge from Rome and Greece.

In one of his recreational expeditions, he climbed to the summit of Mount Ventoux. Books and journals dedicated to mountaineering still cite his letters that describes his aesthetic gratification in the scenery.

Although he never married, Petrarca had two children, a son, Giovanni, and a daughter, Francesca, both of whom he later legitimized.

Giovanni died of the plague. Petrarca spent his final years with his daughter in the small town of Arquà near Padua in religious contemplation. He died in 1374, one day short of his 70th birthday.

Was Petrarca’s skull swapped during a robbery?

Just over 250 years after Petrarca’s death, a drunken friar and four accomplices broke into his tomb and stole some of Petrarca’s remains. The culprits were later arrested, but the missing bones were never recovered.

When his tomb was reopened centuries later in 2003, researchers were fairly certain that the reassembled skeleton belonged to Petrarca, since it bore evidence of injuries known to have affected Petrarca during his lifetime.

However, the skull was discovered in fragments, and it was speculated that it belonged to a different individual. DNA analyses were conducted to address the possibility that the skull was swapped during the robbery in 1630.

To determine if the skull and the remaining skeleton actually belonged to the same person, mitochondrial DNA profiles were generated from a tooth and a rib collected from the tomb.

Mitochondrial DNA (mtDNA) has a high copy number (hundreds of copies per cell), rapid evolution rate and strict maternal inheritance. This makes it the most suitable and informative DNA type for the analysis of ancient human remains.

Three regions of the mtDNA can be analyzed – two hypervariable regions (HVR1 and HVR2) and the coding region.

Researchers identified four differences between the mtDNA profiles of the HVR1 region generated from the tooth and the rib. This meant that there is no possibility they came from the same person.

Further analyses revealed that the rib belonged to a male. But the tooth actually belonged to a female. Radiocarbon dating of the skull showed that is was actually two centuries older than the remainder of the skeleton.

The discovery that the skull in Petrarca’s tomb didn’t actually belong to this famous poet somewhat upset the plans made to commemorate his 700th birthday.

While DNA analyses confirmed that a skull swap did occur at some point in history, the actual date of this swap cannot be confirmed. It most likely occurred during the grave robbery in 1630. This means that Petrarca’s own skull is still missing and is unlikely to be recovered.

The DNA tests conducted in this study have defined the mtDNA profile of Francesco Petrarca. If you have taken the DNA Maternal Ancestry Test, you can compare your mtDNA against Petrarca to see if you may have descended from the same maternal lineage as this famous Italian poet.