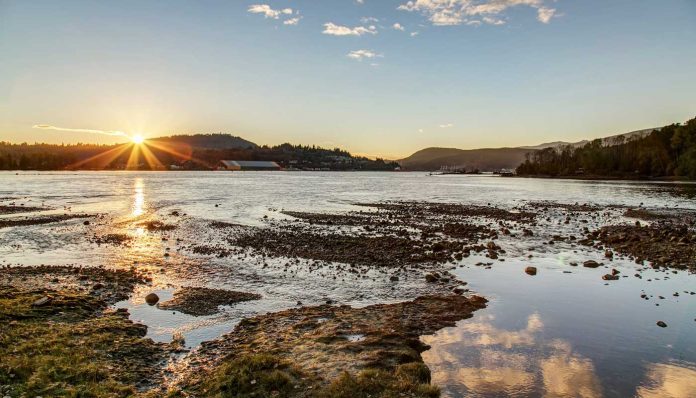 The Holy Loch was used as a ballistic missile refit site by the US Navy from 1961 to 1992. So, when bones were discovered during a clearing of the seabed in 2000, it was assumed they belonged to one of the thirteen men that went missing during this time. This is the story of Larry Claude Battles, an 18-year old sailor from Alabama who fell overboard from the USS Hunley. More than 35 years after his death, DNA analyses have confirmed his identity.

They were one of the major weapon systems used during the Cold War (between US and Russia), because ballistic missiles can fire thousands of kilometers from their target, and are hard to detect, making them perfect weapons for a first strike.

However, early submarine-launched ballistic missiles only had a short range. This meant that if the US forward deployment submarines were to serve as first point of contact with the enemy, they needed to have service and deployment sites near Europe.

So, during the early 1960’s three such forward deploying Advance Refit Sites were chosen: Rota in Spain, Holy Loch in Scotland and Guam. This allowed shorter transit times, allowing the US to patrol areas near the Soviet Union better.

History of the Holy Loch

The Holy Loch is a sea inlet in Argyll and Bute, in western Scotland. Its name is believed to have originated in the 6thcentury when an Irish Catholic saint, Saint Munn, landed there and founded a monastic community.

By the 15thcentury, the area was a significant local center of Christianity. The powerful Highland Scottish Clan Campbell made it their spiritual home. The Kilmun Parish Church and Argyll Mausoleum are now on the site of the ancient Saint Munn’s church.

Saint Munn, a descendant of great dynasty of High King Niall of Tara, founded a monastic community at the Holy Loch. The area was had become a significant local center of Christianity by the 15th century. The powerful Highland Scottish Clan Campbell made it their spiritual home. The Kilmun Parish Church and Argyll Mausoleum are now on the site of the ancient Saint Munn’s church.

The Holy Loch was an ideal choice as the British Royal Navy used it as a submarine base during World War II. Other selection criteria included a sheltered anchorage, close proximity to an international airport and enough facilities in shore to house military personnel and their families.

In 1961, the Holy Loch became Fleet Ballistic Missile Refit Site One for the US Navy. It was the home base of the Submarine Squadron 14, part of the US Atlantic Fleet. Five different submarine tenders (depot ships that supply and service submarines) and one floating dry dock served the loch.

The submarine tenders included USS Proteus, USS Hunley, USS Simon Lake, USS Canopus, USS Holland, Hunley on her 2nd tour, and finally Simon Lake on her 2nd tour. The Dry Dock, USS Los Alamos towed in 1961, completed over 2800 submarine docking operations in the 30 years it was at the Holy Loch.

Advent of new technologies and the end of the cold war deemed the base unnecessary in 1991. The USS Simon Lake left the Holy Loch in November 1991 and the base was closed in 1992.

Discovery of human remains in the Holy Loch

In February 2000, four human bones were discovered during an extensive clearing of the debris from the seabed of the Holy Loch. A week later, a fifth bone was recovered in a slightly different area. It was assumed that all five bones belonged to the same person.

Initial examinations determined the bones belonged to an adult male aged between 15 and 23 years, with a height of 168-174 cm. Police records indicate that 13 men had gone missing in the Holy Loch from 1965 to 1989. The age and height estimates narrowed the search down to 3 missing men.

Genetic analyses were used to confirm the identity of the remains and to determine whether all five bones belonged to the same person. Blood samples were obtained from relatives of the three missing men.

Researchers opted for using autosomal STRs (short tandem repeats) that are useful for analyzing degraded samples, because only small regions of DNA need to be analyzed. STR profiles were generated from the blood samples and the fifth bone that was recovered separately. This may have been because this bone was in a different microenvironment of the Holy Loch.

The STR profile of the bone matched one of the reference samples, suggesting the bone belonged to her missing son, Larry Claude Battles. Larry went missing from the USS Hunley while the ship was birthed at the Holy Loch.

Mitochondrial DNA to confirm the bones belonged to one person

Because they weren’t able to generate autosomal STR profiles for the remaining 4 bones, the researchers were still unsure whether all recovered bones belonged to the same person. For this they performed a second set of DNA analyses targeting mitochondrial DNA (mtDNA).

MtDNA is more useful for degraded remains because it’s much more abundant than nuclear DNA. Three regions of the mtDNA can be sequenced: the two hypervariable regions, HVR1 and HVR2, and the coding region.

The HVR1 profiles generated from all five bones were identical. They also matched to the mtDNA profile of Larry Battle’s mother that was tentatively identified in the autosomal STR analysis.

Together these DNA analyses identified that the remains belonged to Larry Claude Battles, a sailor who reportedly fell overboard the USS Hunley in the late 1960s when the first was first docked at the Holy Loch.

If you have taken the DNA Maternal Ancestry Test, you can find out if you may have descended from the same maternal lineage as this US sailor, who served during the Cold War.

There are some among the Jews who holds special status. These Jewish ‘aristocrats’ are known as the Cohanim. They belong to the Jewish priestly...
Read more
Weight Loss