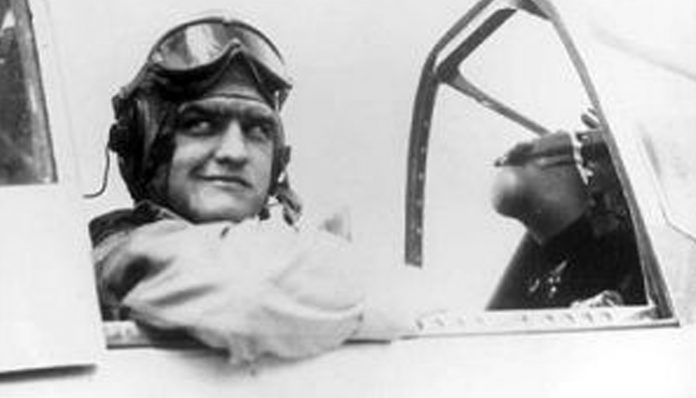 James McGovern carved out his flying career during WWII, but in the First Indochina War he met his fate. While his death received much attention in the US, the exact details of his final flight remained a mystery for decades. More than 50 years after his death, DNA analyses have confirmed that the remains excavated from a village in Laos belong to James McGovern, allowing this legendary war hero to take his final flight home.

Who was “Earthquake McGoon?”

Even as a child, James McGovern aspired to be a fighter pilot. In 1942, two years after graduating from high school, he enlisted in the US Army Air Corps. McGovern was stationed in China during WWII, where he built his legendary reputation as a fighter pilot.

This is also when he earned his nickname “Earthquake McGoon” after the fierce and primitively charismatic wrestler from the popular Li’l Abner comic strip. At six feet and 260 pounds, large for a fighter pilot, and with his larger than life attitude, the nickname suited McGovern.

After WWII, McGovern continued his flying career, piloting a Civil Air Transport (CAT) C-119 plane during the First Indochina War. He was one of 37 CAT pilots who delivered supplies to French military forces in northwestern Vietnam, during the last months of the Battle of Dien Bien Phu.

On his final flight (May 6th, 1954), McGovern and his American co-pilot, Wallace Buford, were piloting one of six CAT C-119s carrying supplies and ammunition to Isabelle. Isabelle was the last firebase in the valley still in French hands.

As McGovern and Buford approached the drop zone, they were hit twice by ground fire. It took out one engine and damaged the horizontal stabilizer. The two experienced pilots managed to keep their aircraft aloft for another 40 minutes. They almost managed to reach a remote landing strip nearly 75 miles away.

Tragically, a wing clipped a tree just a few hundred yards short of the landing strip. “Looks like this is it son” were McGovern’s last words, as the plane started wheeling. A moment later the plane had broken in half, sending McGovern, Buford, and two French paratroopers to a fiery death. A Malay paratrooper later succumbed to his injuries, leaving a French officer as the sole survivor of McGovern’s final flight.

Discovery of the remains

McGovern’s tragic death was widely publicized. But many of the details surrounding his final flight remained a secret for at least a decade, especially the fact that CAT was operated by the CIA.

In the late 1990s, multiple investigations searched the area for the aircraft wreckage. Nothing substantial was discovered until a team investigating an unrelated crash found a propeller from an old C-119 – the type of plane that was McGovern was flying. Eventually skeletal remains from an unmarked grave were exhumed near the village of Ban Sot in December 2002.

Initial evaluations of the remains offered much hope to the McGovern family. They belonged to an adult Caucasoid male of approximately 69 inches in height – the estimated height of McGovern.

The dental remains did not match the records available for Buford, so he was tentatively ruled out. No dental records were available for McGovern or the two French soldiers. However, the dental bridge of the skeleton was consistent with photographs of McGovern, providing inconclusive evidence that it was McGovern’s skeleton. DNA analyses was required to conclusively identify the remains.

Researchers analyzed several different types of DNA: mitochondrial DNA that is strictly maternally inherited (from mother to child), Y-DNA that is paternally inherited (father to son) and autosomal DNA, which is inherited equally from each parent. DNA samples were collected from the skeletal remains (left femur), from seven living relatives of McGovern, and from a maternal cousin of Buford.

The initial analysis focused on mitochondrial DNA (mtDNA).  Due to the high number of mtDNA genomes per cell, mtDNA offers the highest likelihood of obtaining adequate levels of DNA .

There are three regions of the mtDNA that can be analyzed – HVR1, HVR2 and the coding region. The mtDNA HVR1 profile from the skeletal remains matched the profile of McGovern’s maternal cousin.

This indicated that McGovern and this cousin shared a common maternal ancestor, the same maternal grandmother. This mtDNA profile differed from the mtDNA profile of Buford’s maternal cousin, confirming that the remains do not belong to Buford.

The Y-DNA STR profile obtained from the skeleton matched that of McGovern’s nephew (his brother’s son). The autosomal STR profiles from several other relatives also further supported the positive identification of McGovern’s skeletal remains.

Are you related to “Earthquake McGoon?”

The combination of mtDNA, Y-DNA and autosomal DNA results provides very strong evidence (likelihood ratio of 96,900) that the skeletal remains are indeed those of McGovern. In October 2005, over fifty years after his death, McGovern finally received a well-earned military funeral.

The DNA tests conducted in this study have defined the mtDNA profile of James McGovern. If you have taken the DNA Maternal Ancestry Test, you can compare your DNA against McGovern to see if you may have descended from the same maternal lineage.