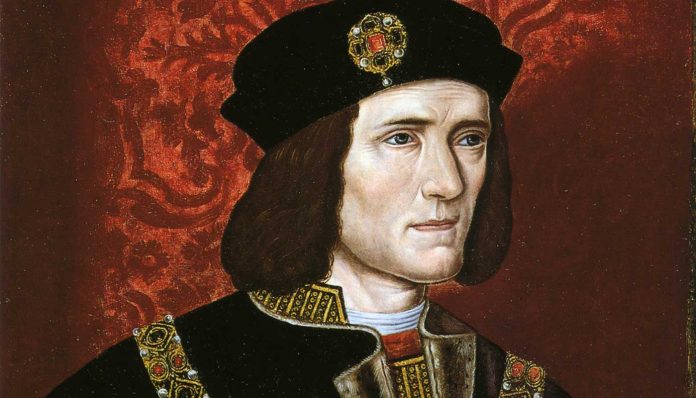 King Richard III is often accused of being a usurper for seizing the throne from its rightful owner, young Edward V. But is it possible that Richard III never even had a rightful claim to the throne, and was “illegitimate?” DNA testing of his remains raises the possibility that King Richard III wasn’t the great-great-grandson of King Edward III.

King Richard III became king under controversial circumstances. In 1483, when his health began to fail, King Edward IV made his brother Richard, Duke of Gloucester, the Lord Protector of his twelve-year-old son Edward V, who was the heir to the throne.

Young Edward V reigned as King for the two brief months following his father’s death, but he was never crowned. Instead, the statute of Titulus Regius issued by the Parliament of England declared Richard as the new king.

The reason?  Richard had received information about a prior marriage of King Edward IV to lady Eleanor Butler. This invalidated his marriage to Elizabeth Woodville and deemed their children, including Edward V, illegitimate.

The ‘Princes in the Towers’

Some historians claim Richard himself originated these rumors. What’s more, shortly after Richard’s coronation, Edward V and his younger brother made their last public appearance. The ‘princes in the tower’ as they are known were never seen again in public. Rumors swirled that the young boys had been murdered upon Richard’s instructions.

This controversial rise to power cause much conflict and rebellion during King Richard’s rein. They ultimately lead to his death in the Battle of Bosworth Field.

Following his death, Richard’s body was hastily buried without much fanfare in a tomb in Greyfriars Church in Leicester. This church and Richard’s tombstone were destroyed during the Dissolution of the Monasteries in the late 1530s. There were numerous developments in the area over the next 400 years, which hid the site of the old church, the tombs and church garden. Richard’s remains were thought to be lost forever.

Discovery of the remains of King Richard III

In 2012, a search began for the remains of King Richard III. The search was led by Philippa Langley a member of the Richard III Society (Looking for Richard Project) in association with archaeologists on the University of Leicester and the Leicester City Council. They discovered a skeleton during an excavation of a city council car park in the approximate location of the Greyfriars Church.

The skeleton was believed to belong to King Richard for several reasons. The body was of an adult male and radiocarbon dating placed the skeleton in the correct time period. The description of the skeleton also closely matched with the appearance of Richard from contemporary reports.

There was evidence of severe scoliosis (a condition that curves the spine), and Richard was known to have one shoulder higher than the other. Forensic pathologists also identified a number of injuries such as the “mortal battlefield wound to the back of the skull” that Richard was reported to have suffered.

Identifying King Richard III based on his mitochondrial DNA

Mitochondrial DNA (mtDNA) is an excellent option to confirm the identity of the ancient skeletal remains. There are many copies of mtDNA in a single cell and they evolve at a rapid rate. Both males and females inherit mtDNA from their mother. However, only females will pass the mtDNA down to the next generation, providing a way of tracing maternal ancestry.

Although King Richard III did not pass his mtDNA to any future generations, his mtDNA profile was identical to that of his mother and siblings, including Anne of York. Researchers identified two living maternal descendants of Anne of York – Michael Ibsen and Wendy Duldig. They agreed to provide DNA samples for the study.

Three regions of the mtDNA  can be analyzed – HVR1, HVR2 and the coding region. Profiles were generated for all three regions for the skeletal remains discovered in Leicester and for Michael Ibsen and Wendy Duldig.

The skeletal mtDNA profile was a perfect match to the mtDNA profile of Ibsen. There was only a single base pair difference when compared to Duldig. Since this mtDNA profile is extremely rare, the positive match provides strong genetic evidence that the remains indeed belong to King Richard III.

The researchers next analyzed the paternally inherited Y-DNA from King Richard III’s skeletal remains, to provide further genetic evidence that they have been correctly identified.

What does this mean? At least two non-paternity events (infidelity) have happened somewhere in the family tree creating false paternal lineages.

Where did the non-paternity events occur?

Let’s start with the Y-DNA profile of Somerset 3. This can be explained by an infidelity that occurred within the last four generations.

But, exactly where the second infidelity event happened can’t be confirmed based on the current genetic data. It may have been in the Beaufort line between King Edward III and the 19-21 generations to the five living descendants analyzed in this study.

Or was there infidelity in the royal line between King Edward III and his great-great-grandson King Richard III? If so, which historical English kings and queens actually had legitimate claims to the throne?

King Richard III’s successor, King Henry VII, claimed the throne by right of conquest rather than inheritance; hence any potential non-paternity events do not affect his, and his descendants’ claim to the throne. The legitimacy of the current queen is also not in question, as it was set through the 1701 Act of Settlement.

But, if the infidelity occurred between King Richard III and his great-great-grandfather King Edward III, then the controversial King Richard III never actually had a legitimate claim to the throne!

Did you descend from the same lineage as King Richard III?

A similar mtDNA profile indicates that you share a maternal lineage with the likes of Lady Joan Beaufort, Lady Cecily Neville, Anne of York, and Anne St Leger. A  similar Y-DNA profile means that you share a paternal lineage with the controversial King Richard III and his notable paternal ancestors, including King Henry III and the three English King Edwards (I, II and III).

Of course, this only holds true if there are no non-paternity events in this royal line! Richard himself and his brother Edward IV had no known surviving paternal descendants. Richard’s son died at age 10, and Edward IV’s young sons mysteriously disappeared under Richard’s reign.

Do you descend from one of the greatest commanders in history?
Read more
Famous DNA