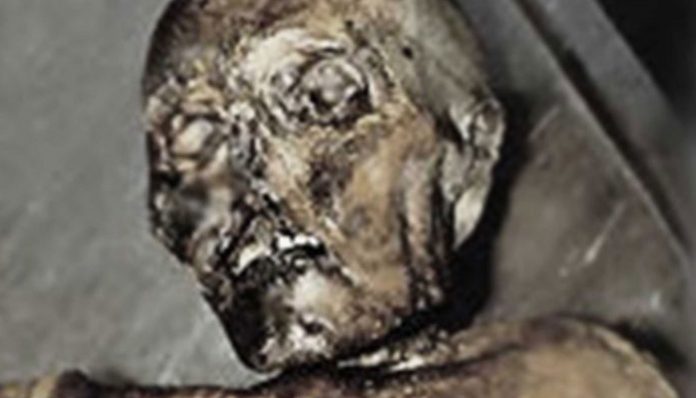 Two people are hiking along a glacier when they come across a brown, leathery shape stuck in ice. When looking more closely makes them realize it’s a human body, one hiker passes out. In a matter of few hours, the area is swarming with cops and crime scene investigators. Remind you of an episode from the TV show Bones? Well, it’s not.

This is the true story of the discovery of Ötzi the Iceman (except for the part where one of the hikers passes out). And what genetic analyses reveal to us about this ancient European.  But, given the mystery behind exactly how Ötzi ended up frozen, it most certainly would make a perfect backstory for an episode of Bones.

Ötzi’s story began in 1991 when two hikers discovered his body at a rock-gully in a glacier near the Austro-Italian border. Austrian police soon realized they weren’t dealing with an ordinary mountaineering accident, but an ancient archaeological site. So, a team of scientists were brought in to carefully extract the remains, which were taken to the Institute of Forensic Medicine in Innsbruck.

Because he was such an incredibly valuable archaeological find, both Austria and Italy staked their claims for Ötzi. After a border survey, Italy gained legal possession of his body and artefacts. Ötzi now rests in a climate-controlled facility at the South Tyrol Museum of Archaeology in Bolzano, Italy.

Tyrolean Iceman or Ötzi the Iceman is named after the region of Alps he was discovered. Radiocarbon dating showed that he was over 5000 years old. This meant Ötzi lived between 3350 and 3100 BC, making him Europe’s oldest known natural mummy. He’s older than the Egyptian and Inca mummies that have been discovered to date.

Ötzi is also rather unique from the Egyptian mummies. Egyptian mummies are preserved using intentional dehydration. But Ötzi is what you call a ‘wet’ mummy. The spontaneous freeze-drying process that took place after his death captured the humidity, keeping his body, clothing and equipment in an incredible state of preservation.

Ötzi’s body was perfectly intact, untouched by funeral rituals like embalming. He was perfectly preserved, down to contents in his digestive tract.

Who was Ötzi the Iceman?

Over the years scientists have learned quite a bit about Ötzi. He was approximately 46 years old, and suffered from tooth decay, gum disease and worn joints. In the Copper Age Ötzi would have been considered elderly, so it’s understandable that he suffered from conditions associated with old-age.

He also sported tattoos. However, these may have been therapeutic, rather than symbolic. The markings were made by rubbing charcoal over small cuts, not with a needle and ink, as has been seen with other cultures.

The locations of his tattoos were amazingly consistent with known acupuncture points that were discovered by the Chinese 2000 years after Ötzi’s existence.

Using the contents from his stomach, scientists even pieced together that Ötzi had climbed all the way from the valley floor to the top of the pass just 24 hours before he died.

And, perhaps the most intriguing fact about Ötzi is that he didn’t die from exposure. He was murdered with an arrow to the back, and a mace blow to the face.

Where did Ötzi come from?

As DNA sequencing technologies evolved, scientists have been able to gradually piece together a picture of where Ötzi came from and what life would have been like in the Copper Age. His DNA story is the work of many scientists that spanned over more than a decade.

Ötzi’s DNA story began in 1994. Researchers first focused on the mitochondrial DNA (mtDNA). Mitochondria are the powerhouses in our cells. MtDNA is ideal for analysing ancient human remains, because there are hundreds of mitochondria in each of our cells. They evolve rapidly and are strictly maternally inherited (passed from mother-to-child).

Three regions of mtDNA can be analyzed: the coding region (which contain the instructions for genes), and two non-coding regions, HVR1 and HVR2.

MtDNA analysis is useful for tracing maternal ancestry, and to see where a person fits in the global mitochondrial family tree.

Ötzi belonged to the mtDNA subclade K1. Interestingly, his mtDNA sequence was different from all existing branches within the K1 subclade (K1a, K1b and K1c). So, he was given a new subclade of his own (his own small family group), K1f.

In 2012, researchers sequenced the entire nuclear genome of Ötzi, including the paternally inherited Y chromosome. Y-DNA is passed down from father to son (strictly paternally inherited), and is useful for tracing paternal ancestry. Like with the mtDNA tree, Y-DNA can tell us where we fit in the Y-DNA family tree.

Researchers also looked at the DNA from rest of Ötzi’s genome (autosomal DNA) to further confirm a close relationship to southern Europeans, especially in the geographically isolated populations of Corsica and Sardinia.

Several other interesting characteristics of Ötzi were uncovered using his autosomal DNA. He had brown eyes, belonged to blood group O, was lactose intolerant and had an increased risk of coronary heart disease. They also found DNA from the bacteria Borrelia burgdorferi suggesting that Ötzi may have had Lyme disease, the earliest human known to suffer from it.

How is Ötzi related to modern Europeans?

Ötzi’s maternal line has been lost from present-day populations. But his paternal line is still observed in Europe, particularly in Corsica and Sardinia. Scientists think the explanation may be geographical isolation.

The idea is that following a population expansion and migration through Europe, Sardinians and Corsicans were isolated in the Alps. In their isolation they maintained the K1f branch, while it was replaced by other more common haplogroups in the rest of the continent.

It’s possible that the genetic profile of Ötzi was once widespread throughout Europe, before it became restricted to just the isolated populations in the Tyrrhenian Sea.

Are you related to this prehistoric European?

Keller A et al. (2012) New insights into the Tyrolean Iceman’s origin and phenotype as inferred by whole-genome sequencing. Nat Commun. 3:698.

Moving, grooving, exercising and genes: The secret behind your love of exercise
Read more
Fitness