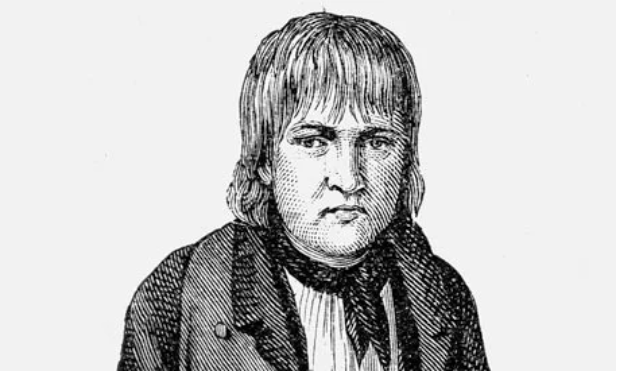 Who was Kaspar Hauser?

In 1828, Kaspar Hauser appeared as a teenager on the streets of Nuremberg, Germany. He carried with him a letter addressed to Captain von Wessenig in the cavalry regiment, requesting him to either turn the boy into a cavalry man as his father, or to hang him.

According to the anonymous letter Kaspar was given over to his ‘captor’ as an infant, with instructions to teach him reading, writing and religion. But, they were not to allow the child to “take a single step out of [the] house.”

Hauser had a limited vocabulary. He was able to write his name, read a little and say a few prayers. He claimed to have spent most of his life alone in a small dark dungeon, fed just bread and water by a masked man who was his only human contact.

Hauser had many different caregivers over the next five years. At each home, the relationship between Hauser and his caregiver started off well. But, each relationship quickly deteriorated because Hauser was an excessive liar.

Then there was a series of alleged attacks. The first “attack” took place in 1829. Hauser was discovered with a cut on his forehead in the cellar. In his version of the incident, the hooded man from the dungeon attacked Hauser. But, others believed the wound was self-inflicted.

The final fatal “attack” happened in December 1833, when Hauser returned home with a deep stab wound in his chest. A stranger allegedly lured Kaspar to the Ansbach Court Garden, where he was stabbed and given a bag. Police found this bag and an incomplete note supposedly from his attacker indicating where he may be found.

Because of Hauser’s history of lying investigators examined the note closely and found a spelling error, a grammar error, and a specific triangular folding pattern, all typical of Hauser. They concluded that Hauser had written the note himself and may have stabbed himself, to revive public interest in his story.

Was Hauser the true Prince of Baden?

His unusual tale and mysterious death generated much excitement, and gained Hauser international attention. Rumors arose that he may be the son of Grand Duke Carl von Baden and Stephanie de Beauharnais, adopted daughter of Napoleon I.

Their eldest son had died shortly after birth. However, it was speculated that the true Prince was exchanged for a sick child in an attempt to change the succession to another branch of the family.

The prime suspect was the Countess of Hochberg, Louise Caroline. If Grand Duke Karl did not leave an heir, her son Leopold would come to power. So, when Prince of Baden was born she performed a switch.

Records indicate that Hauser bore a remarkable resemblance to Grand Duke Karl. If the young prince had really survived, he would have been around the same age as the mysterious Hauser. Many also claimed Kaspar’s “assassination” supported the belief that he really was the Prince of Baden.

At the time, there was no way to prove or disprove these rumors, but in 1998, DNA analyses provided that opportunity.

DNA analyses require authentic material from the study subjects, ideally from human remains. It was unknown whether Hauser’s gravestone was still above the correct grave, due to disturbances during the war.

So, researchers elected to use a section of fabric from the blood soaked underpants that Hauser was wearing during his alleged assassination. The court originally seized this clothing after the stabbing. It was later given to the Historical Society of Ansbach.

Researchers chose mitochondrial DNA (mtDNA) analyses, because there are multiple copies of the mtDNA genome per cell. This increases the likelihood of obtaining quality DNA, especially from degraded samples.

MtDNA is inherited in a strict maternal pattern (mother to child). It’s useful for tracing maternal lineages, even when the subject and available references are several generations apart.

In this case, researchers acquired two reference samples from living maternal descendants of Stephanie de Beauharnais – the putative mother of Hauser if he was indeed the Prince of Baden.

These two descendants will share the same mtDNA profile as Stephanie de Beauharnais and any of her children.

Two independent laboratories generated identical mtDNA profiles from the bloodstained fabric of Hauser. In both cases this mtDNA profile differed significantly from the profile of the two references, questioning the claim Hauser didn’t belong to the House of Baden.

Then in 2002, another set of DNA analyses were performed by the Institute for Forensic Medicine of the University of Munster. They looked at hair and body cells as well as clothing that belonged to Hauser and compared these DNA samples to Astrid von Medinger, another descendant of Stephanie Beauharnias.

The profiles were similar. BUT, the DNA profile from these samples didn’t match the original DNA profile generated from the bloody underwear of Hauser in 1998. So the true identity of Hauser is still unknown and his story remains a mystery.

The House of Baden refuses to comment on the Hauser case or allow DNA samples from the remains of Grand Duchess of Baden, Stephanie Beauharnais to be examined. So the saga of Kapsar continues. Some believe that he was just a pathological liar with a hysterical and attention-seeking personality.

The DNA tests conducted in this study have defined the mtDNA profiles of Kaspar Hauser and Stephanie de Beauharnais. If you have taken the DNA Maternal Ancestry Test, you can compare your mtDNA to either Kapsar Hauser or the Grand Duchess of Baden.

The origins of our mitochondrial DNA
Read more
Skin Health