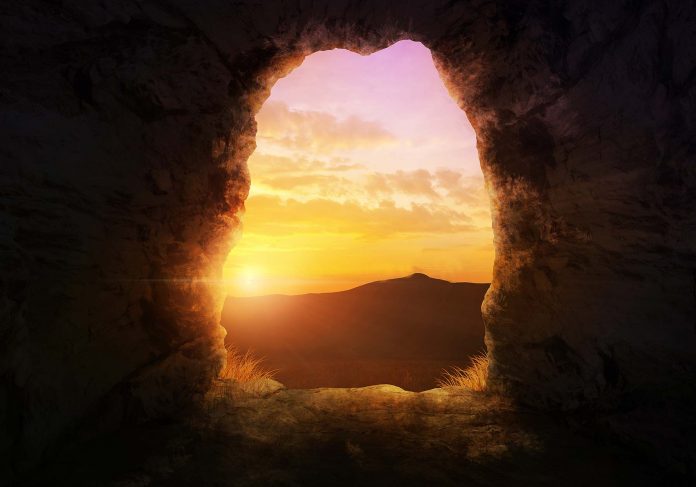 The “Field of Blood”

In the summer of 2000, an archaeologist and a professor took five students on an educational hike. They were studying abandoned first-century tombs, when they stumbled upon a freshly robbed three-level tomb, cut into the bedrock. This was how the aptly named Tomb of the Shroud was discovered, quite by accident (for a personal account of the discovery, read Dr James Tabor’s blog).

The Tomb of the Shroud is located at the foot of Mount Zion in Akeldama, Jerusalem. Akeldama or “the Field of Blood” has an intriguing history behind it. Christian traditions connect it to Judas Iscariot.

According to the Bible, Judas betrayed Jesus for 30 pieces of silver. But, before he hanged himself, he returned the money to the Temple. The priests declared the silver ‘blood money.’ They couldn’t put it in their treasury, so they used it to buy Potter’s field as a burial ground for foreigners.

Since then this land has been called “the Field of Blood.” Other passages from the Bible also suggest that Akeldama may be the location where Judas committed suicide.

Tomb of the Shroud

This tomb is one of more than 70 tombs in the area. Another tomb, Tomb of Annas, thought to belong to a very influential High Priest from 6-15 AD is also located in Akeldama. But, Tomb of the Shroud is unique, because preserved in it among the skeletal remains was fragment of a degraded shroud and a clump of human hair.

Radiocarbon dating of the cloth confirmed that the tomb was more than 2000 years old (between 1-50AD) placing it in the Jesus Era. Since this discovery, the authenticity of the Shroud of Turin (assumed to be the one that was wrapped around the body of Jesus) has come into question.

For example, the simple weave pattern of this shroud is quite different from the complex pattern seen on the Turin Shroud. If you assume that the cloth from the Tomb of the Shroud represents a typical burial shroud used in the Jesus-era, then it’s likely the Turin Shroud didn’t originate from the same-era Jerusalem.

In the first century, Jewish people generally buried the dead in a primary burial site, known as a loculus, until the body decomposed. Then about a year later, the bones were reburied in a pit, niche or stone ossuary (a bone box).

Remains in the Tomb of the Shroud were all buried in these secondary burial niches, except for one skeleton (which will be referred to as SC1 from here on).

SC1 was still in a primary loculus, along with a degraded piece of textile and hair. The high levels of humidity in Jerusalem usually prevent the preservation of any organic material.

But, the loculus with SC1 and another niche with skeletons of two infants were sealed off with a white plaster. They had remained sealed until the looting. This finding was highly unusual, since second burials were a common practice in first century Jerusalem.

DNA analyses of this Jesus-era tomb

One explanation was that the man (SC1) and the two children had suffered from an infectious disease. So the remains were sealed off to stop the spread of disease. Tuberculosis and leprosy were two of the most likely contagious diseases that would prompt sealing of the burial niches.

Usually both these diseases can be identified using changes in bone structure. But, the looting had damaged all of the skeletons. This made traditional morphological analyses impossible, aside from suspected pathology on a phalanx (from the hand).

So, scientists opted for genetic analyses, making the Tomb of the Shroud the first ever Jesus-era tomb to be examined using molecular techniques.

Tests found Mycobacterium tuberculosis DNA in samples from all three skeletons in the sealed sections (SC1 and the two infants). It was absent from all of the other samples from the tomb. SC1 samples also tested positive for Mycobacterium leprae DNA. Based on this researchers deduced that the man had suffered from leprosy and had died from tuberculosis.

This is the earliest reported case of leprosy to be confirmed by DNA tests from ancient Israel. Tuberculosis and leprosy infections were generally fatal during the first century. So the tomb was likely sealed off with white plaster in an effort to contain the disease. The risk of infection also explains why the skeleton of the man (SC1) was never given a second burial.

Leprosy is a disfiguring disease, so sufferers were usually ostracized from society. Historically it was often thought of as a disease of the poor.

But, the size and location of the tomb, the type of textile used for the shroud, and the cleanliness of the clump of hair, suggest this man may have been an affluent member of society. This means leprosy may have crossed social boundaries in 1st century Jerusalem.

Was it a family tomb?

With the mystery of the sealed tombs solved, investigators next focused on the remains. Was Tomb of the Shroud a family tomb? Genetic analyses of mitochondrial DNA (mtDNA) analyses can answer this question, because mtDNA is useful for tracing maternal ancestry.

Both men and women have mtDNA. However, only females pass on their mtDNA to the next generation. The strict maternal inheritance, the high copy number (hundreds of copies per cell) and the rapid rate of evolution make mtDNA the most suitable and informative for studying ancient human remains.

Three regions of mtDNA can be analyzed: two non-coding regions, HVR1 and HVR2, and the coding region. Researchers were able to generate partial sequences for both HVR1 and HVR2 regions from the remains.

Genetic analyses identified seven different mtDNA profiles across the 11 individuals, suggesting that several of the skeletal remains were maternally related. Tomb of the Shroud was indeed a family tomb, housing family members from several generations.

But, only some of the skeletons indicated maternal relationships. It’s possible that these skeletons are paternal linked, which was not examined in this study.

The Tomb of the Shroud is a unique discovery. It’s the only first-century Jerusalem tomb to contain a textile fragment. It’s also the first to be examined using molecular analyses, which confirmed the earliest case of leprosy in ancient Jerusalem.

This study identified seven different mtDNA profiles of people who lived during the first century in Jerusalem. According to Dr. Tabor these DNA profiles are now being compared to profiles generated from the remains in the Talpiot tomb. Talpiot tomb discovered in East Jerusalem is considered the “Jesus family tomb”.

If you have taken the DNA Maternal Ancestry Test, you can now compare your mtDNA against these seven profiles from people who lived in first-century Jerusalem, in the time of Jesus.

Shamira, O (2015) A burial textile from the first century CE in Jerusalem compared to roman textiles in the land of Israel and the Turin Shroud. SHS Web of Conferences, 00010 (2015).

The ins and outs of snacking: how a single gene can make us eat all-day long
Read more
Famous & Infamous People