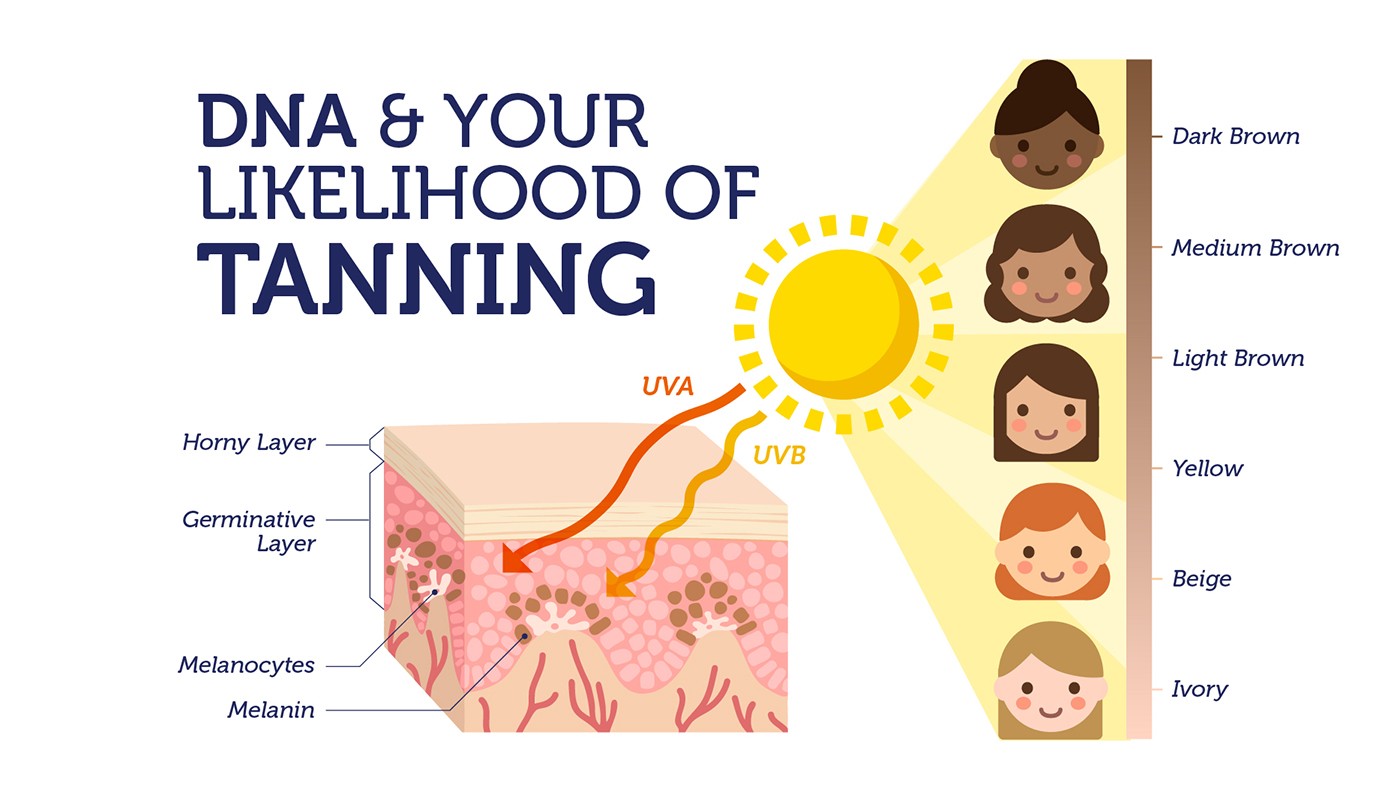 When my son turned two, we had the talk – about melanin. He’s a child of mixed ethnicities, and was already starting to notice the difference between my South Asian skin and his lighter skin.

I chose to give him a scientific explanation, so when repeated, it would in no way be offensive. To this day, he sometimes describes me as “she has melanin.” Yet, try as I might, I couldn’t really predict for him the extent of his tanning ability, until I came across the SLC45A2 gene.

One genetic variant of SLC45A2, aka the Caucasian tanning allele, is an ancestry-informative marker (AIM), or a gene that exists in distinctively different frequencies between populations. It’s also one of the most significant skin pigmentation predictors.

Melanin is a natural pigment found in our bodies. It provides color for our eyes, hair and skin. Melanocytes, the skin cells that make melanin, make two different types of melanin: pheomelanin that is red or yellow in color and eumelanin, which is brown or black.

By default, melanocytes make pheomelanin. But, when exposed to ultraviolet (UV) light they switch to making eumelanin. Eumelanin is much more efficient than pheomelanin at blocking UV rays.

Tanning is a natural defence mechanism against UV damage. So the amount of pigment our skin will need depends quite a bit on our external environment.

If you live in the tropics, where you are constantly exposed to the sun, darker skin is beneficial. Pale skin is more favorable, if you live in higher latitudes, where sunlight is limited. In low sunlight conditions, pale skin absorbs more UV rays helping to avoid vitamin D deficiency.

This explains why the shade of our skin depends quite a bit on our geographical origins.

SLC45A2 encodes a protein is involved in transporting the tyrosine protein that is used to produce melanin.

There are two common versions of the SLC42A4 gene, which result from DNA changes in a specific place of the gene (known as the rs16891982 marker). This change alters a single amino acid on the SLC42A4 transporter protein.

Substituting Leu with Phe reduces the activity of the SLC45A2 transporter protein, and is associated with pale skin, as well as lighter hair and eye color.

This Phe variant is highly prevalent in Europeans (e.g. 96% of Germans), but is rarely found in other ethnicities. In fact, over 99% of Asians and Africans have the Leu version of the gene.

Adapting to our surroundings

When someone of European descent inherits the Leu version (which happens very rarely), it almost always coincides with black hair. Europeans with the ancestral allele also represent a small group who are able to tan more easily, and are at lower risk for sunburn and age spots.

But, the Phe variant also has its advantages, specially at higher altitudes where there’s low sunlight and cooler climates, which is why the Phe variant was selected for in European populations overtime.

How does the Caucasian tanning allele fit into the modern day world where many of us have migrated to climates that are ‘unsuitable’ for our skin?

In my case, SLC45A2 could explain the non-appearance of my “dominant” South Asian features in my children. Will my fair-haired, even more pale-skinned daughter be able to tan in the summer like my son, or will she burn in the sun? Only time will tell.

As we venture onto this new chapter in human evolution, where mixed raced children are slowly becoming the rule rather than the exception, it will be interesting to see the outcome of this real life experiment. If you want to satisfy your curiosity, the SLC45A2 variant is included in the DNA Skin Health Test.

Will we eventually re-adapt to match the shade of our skin to our environment? Or will our knowledge of genetics guide our lifestyle choices and be instrumental to an alternate outcome?

The origins of our mitochondrial DNA
Read more
Skin Health