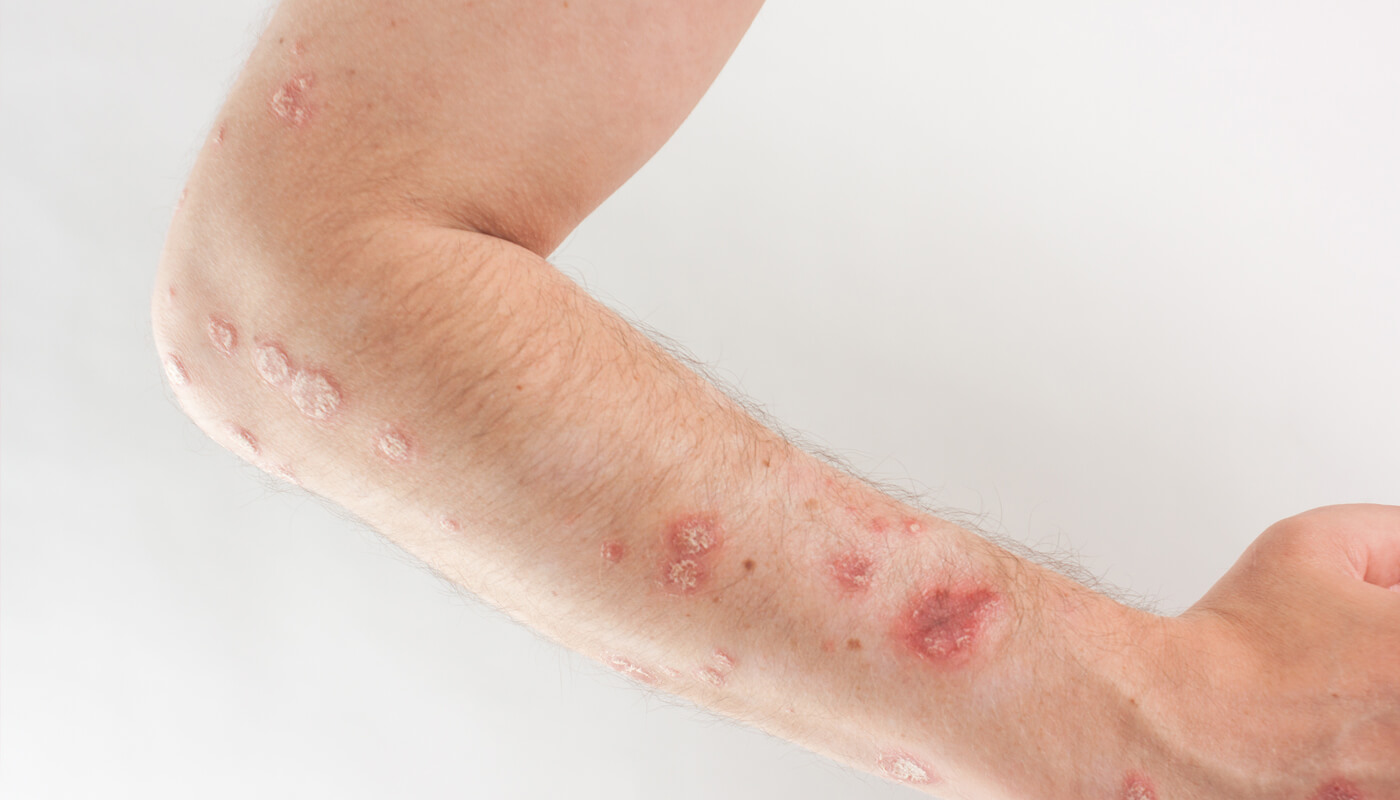 Picture medieval knights in armour. Iron plates, shaped, tempered and hardened for maximum protection. They were virtually invincible, at least until an enemy managed to penetrate one of the weak points between the plates.

Our skin is the equivalent of a knight’s armour. It’s a barrier that protects us from ‘germs’ – things that might pose a threat to our health. Luckily, if a cut or scrape breaches this shield, we have evolved a second line of defence – our immune system.

The immune system can usually quickly and efficiently eliminate invaders and initiate the healing process. But, the story is quite different if you happen to be one of approximately 7.4 million Americans who suffer from psoriasis.

These people know firsthand that the immune system can sometimes malfunction and lose its ability to distinguish a foreign invader from a normal, healthy cell. This is called autoimmunity, and psoriasis is an autoimmune disease that affects the skin.

Psoriasis is characterized by dry, red skin lesions with silvery scales. It’s one of the most baffling and persistent conditions to affect the skin. Even after several decades of research, the actual cause of psoriasis remains elusive.

We know that the skin cells of affected people multiply much faster than normal. They also have an overactive immune response.

HLA-C and the immune response

Dendritic cells, embedded in the layers of our skin are central to the immune response. Normally, dendritic cells consume foreign invaders, then present parts of the pathogen (called ‘antigens’) on their surface using a large protein complex, called the human leukocyte antigen (HLA) complex.

Dendritic cells carry these antigens to the lymph nodes where they trigger T cells to attack the invader. T cells, a type of white blood cell, are supposed to target foreign invaders, and are not supposed to attack our own tissues.

But, DNA changes in the HLA-C gene can disrupt the normal function of T cells. These genetic variants increase the likelihood that T cells will attack healthy skin cells, leading to psoriasis. One variant, rs1265181, enhances the risk of psoriasis by 10-fold, and influences the time of disease onset and the severity of symptoms.

Cytokines, messenger molecules used by cells to communicate with one another, also link immunity to psoriasis.

For example, dendritic cells use the cytokine IL-12  to activate T cells. It binds the IL23R protein on the surface of T cells to relay this activation signal. The IL12B gene encodes a component of IL-12.

The role of inflammation in psoriasis

The role of cytokines in psoriasis doesn’t end there. TNFAIP3 and its interacting protein TNIP are two cytokines that normally reduce inflammation, but variant forms are also associated with this devastating skin disease. Mice that lack a functional TNFAIP3 gene develop faster growing keratinocytes, or skin cells, which mimic psoriasis.

In people, the rs610604 variant of TNFAIP3 leads to more severe psoriasis symptoms, likely due to reduced TNFAIP3 protein function and poorer control of the inflammatory response. TNIP normally functions downstream of TNFAIP3 to also reduce inflammation, but inheriting the rs17728338 variant of TNIP elevates the risk of psoriasis by 59%.

Interestingly, the impact of these genetic variants depends heavily on ethnicity, which helps explain the differences in the prevalence of psoriasis between different ethnic groups.

Like many of the other conditions that affect the skin, psoriasis can have a huge negative impact on the quality of life.

Studies show that patients with psoriasis are more likely to have lower levels of employment and income. When you combine this with the cost associated with long-term therapy required to manage the symptoms, you can imagine the burden faced by someone with psoriasis.

Genetic variants linked to psoriasis are included in the DNA Skin Health Test. Knowing your genetic susceptibility to psoriasis can’t help you to avoid this disease. But, there’s hope that future studies will improve the management of this common skin health condition.

From Friend to Foe: Why our evolutionary need to store fat is now an obstacle in the fight against diabetes
Read more
Famous DNA

Do you descend from a famous Civil War scout?
Read more
Ancestry

The origins of our mitochondrial DNA
Read more
Nutrition