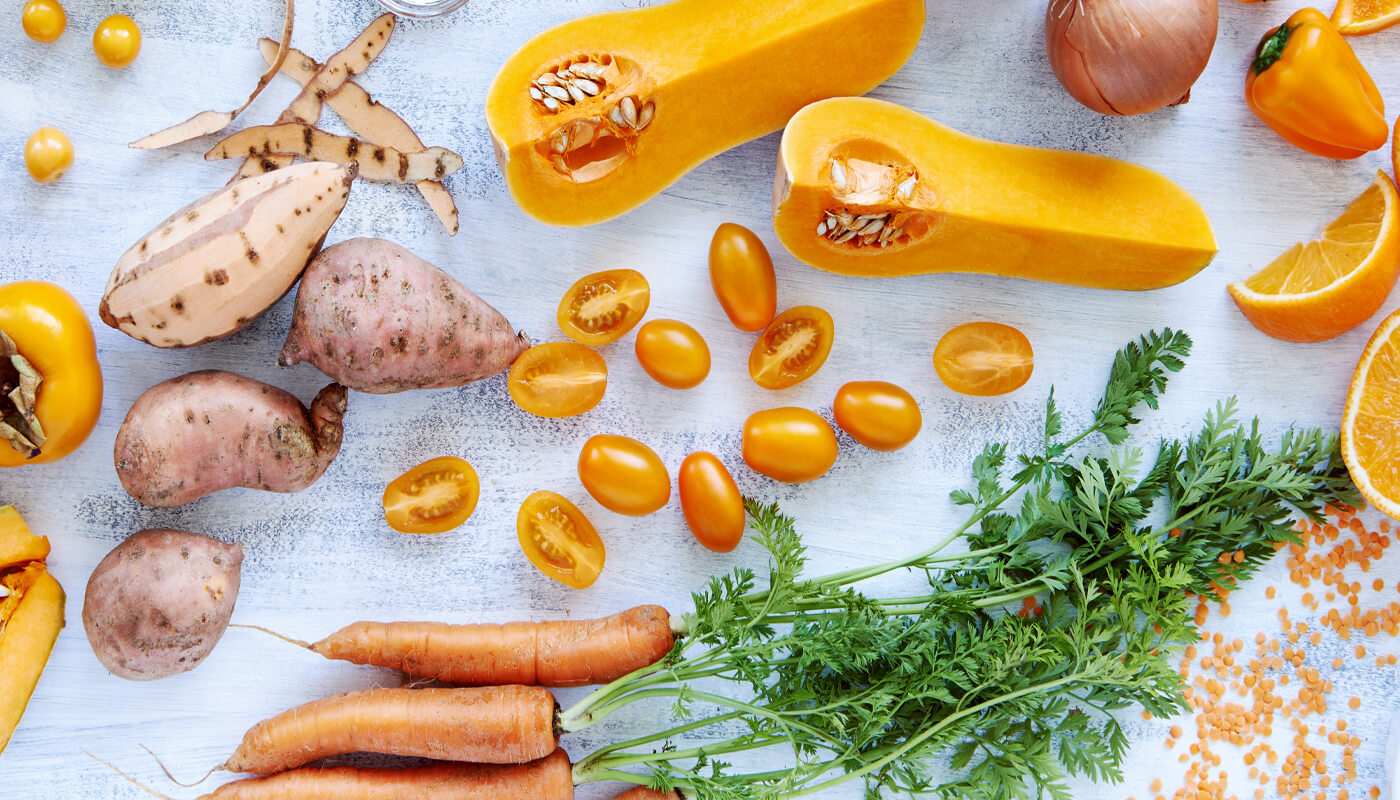 “Daddy! Look at that orange boy.” Secretly hoping your 3-year-old is referring to body paint, you turn around and come face-to-face with a boy whose skin can only be described as yellow or orange.

Carotenosis is actually a clinical condition, caused by eating too many carrots or other yellow, orange and red coloured vegetables containing beta-carotene. If your skin turns yellow in October, when you’ve been eating your fill of pumpkin pie, there’s no need for alarm, because carotenosis is reversible.

However, yellow skin can sometimes indicate something more serious. It could be a sign that your body can’t properly transform beta-carotene into active vitamin A.

Vitamin A is a group of compounds that includes retinol, retinal, retinoic acid and carotenoids. Animal sources of vitamin A contain retinol. Retinol is designated “preformed” vitamin A, because it’s ready to be used by the body.

Plant sources contain provitamin A (carotenoids). Provitamin A has to be converted into the active form before it can be used by the body.

The amount and activity of this enzyme dictates the activation of beta-carotene. This means DNA changes in the BCO1 gene that affect enzyme activity can have drastic effects on vitamin A levels.

Four common DNA changes in the BCO1 gene are linked to vitamin A levels. All of four of these variants reduce the transformation of beta-carotene.

For example, inheriting one defective copy of the rs7501331 T variant can decrease your ability to convert beta-carotene by 32%. A second variant, rs6564851 G, is linked to high beta-carotene levels in the blood, another sign of inefficient conversion.

Poor converters are at risk

Surprisingly, BCO1 variants are much more common than you might think. Almost half of us (44% of the population) carry at least one copy of the rs7501331 T variant.

‘Poor converters’ or people with at least one defective copy of BCO1 are at much higher risk of vitamin A deficiency. The risk is even higher if you are vegetarian and rely on plant sources with beta-carotene.

Symptoms of vitamin A deficiency

Healthy eyes, immunity, red blood cell production, and the growth and maintenance of the heart and lungs all require vitamin A. Therefore vitamin A deficiency can be quite serious, because it impacts many different systems of the body.

Vitamin A deficiency is quite common in the developing world affecting millions of children and pregnant women. Night blindness is one of the first symptoms to occur. It’s the main cause of preventable blindness in developing nations.

Other symptoms include decreased immune function, slow growth, high mortality in children, and poor pregnancy outcomes, such as birth defects. Because of these serious repercussions, vitamin A deficiency is a significant public health concern in the developing world.

Food sources with vitamin A

Thankfully, most of us in the developed world have access to cereal and fortified milk, or a small piece of beef liver. This is all you need to meet your daily vitamin A requirement.

For more details on dietary intake and the best sources of vitamin A, refer to the tables at the end of this article.

In the developed world, we face the opposite problem, hypervitaminosis A, or vitamin A toxicity. This can cause dizziness, nausea, headaches, anorexia, anemia, and joint pain. In severe cases, it can result in liver damage, haemorrhage and even coma.

Vitamin A toxicity can occur through overconsumption of preformed vitamin A in the diet, but is more commonly due to excess supplement intake. It can be very dangerous during pregnancy, leading to birth defects. High vitamin A intake may also increase the risk of osteoporosis.

A word of caution

On the other hand, there’s mounting evidence that increased vitamin A intake may offer protection from cancer and age-related macular degeneration.

If you love your orange fruits and vegetables, you will be happy to know that plant sources of provitamin A can’t cause hypervitominosis A. This is because the enzymes that convert carotenoids limit just how much active vitamin A is produced.

The bottom line, you should be extra cautious when taking vitamin A supplements if they contain preformed vitamin A. See table below for tolerable upper intake levels.

Are you at risk of vitamin A deficiency?

The growing popularity of alternative diets place genetic variants that influence nutrient metabolism in a new light. BCO1 is one such example that impacts a vegan lifestyle. When your diet doesn’t contain animal products, the adequate processing of plant material becomes essential.

If you are considering a vegan or vegetarian lifestyle, especially if your children are joining you, find out your BCO1 status first with the DNA Nutrition Test. It will not only give you a head start, but also peace of mind.

Recommended dietary allowances for vitamin A

These recommended dietary allowances are listed as micrograms of retinol activity equivalents (mcg RAE) to account for the different bioactivities of retinol and provitamin A carotenoids.

Each mcg RAE corresponds to 1 mcg retinol, 2 mcg of beta-carotene in oil, 12 mcg of “dietary” beta-carotene, or 24 mcg of the three other dietary provitamin-A carotenoids.

Adequate intake shown for infants from birth to 12 months is equivalent to the mean intake of vitamin A in healthy, breastfed infants.

Selected foods sources of vitamin A

The “mcg RAE per serving” refers to the retinol activity equivalent (RAE). It accounts for the different bioactivities of retinol and provitamin A carotenoids.

The “IU per serving” refers to the international units measurement, the commonly listed value on food and supplement labels for vitamin A.

The Daily Value (DV) for vitamin A is 5,000 IU for adults and children age 4 and older. The U.S. Food and Drug Administration (FDA) developed DV, so you can compare the nutrient contents of products within the context of a total diet.

These upper limits only apply to animal sources and supplements.  Vitamin A from these sources comes entirely from retinol or ester forms, such as retinyl palmitate.

But, many dietary supplements (such as multivitamins) consist partly or entirely of beta-carotene or other provitamin A carotenoids.

In these cases, the percentage of retinol or retinyl ester in the supplement should be used to determine the upper limit.

Are you related to the mysterious Dark Countess?
Read more
Archaeological Ruins

Was Ötzi one of your ancestors?
Read more
Nutrition

Blueberries for your skin: Antioxidants and the genes that protect your skin from getting old too fast
Read more
Skin Health